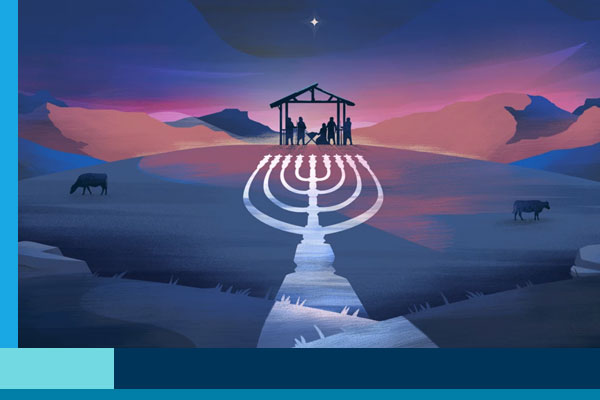 We’re fairly certain Jesus was not born in December however 165 years before His birth another winter miracle did take place. The Greek emperor Antiochus Epiphanes was bent on destroying the Jews. The people had a nickname for him, “Epimanes” which means “crazy man.” Gregory Rommon likens him as “the Adolf Hitler of the inter-testament period.” Antiochus slaughtered Jerusalem’s inhabitants and took over the Temple, dedicating it to Jupiter Olympus. The Torah was destroyed; the Jews forced to take part in heathen rites. Like every Lord of the Rings or Star Wars battle, a small clan of underdogs, outmatched by the Syrian army in every regard, launched a campaign of guerilla warfare to reclaim the Temple. Not only was their victory a David beats Goliath miracle but a second miracle occurred in the lighting of the menorah the lamp signifying the presence of God. They found only a small amount of sacred oil but it fueled the flame for 8 days – the time it took to prepare more of the purified oil. Hanukkah, also known as the Feast of Dedication is mentioned in John’s gospel, the Bible writer most locked in to the theme of light. In John 10 we read the Feast of Dedication took place in Jerusalem; it was winter. Jesus was in the Temple when he was asked “are the Messiah?” The Feast of Dedication marked the last time a deliverer had arisen to save them from oppression. Would it happen again? Jesus declared himself to be the “light of the world” (John 8). He wasn’t employing random poetic language. He was drawing on his Jewish listeners knowledge of Old Testament prophecies and the Hanukkah story to reveal who he was: the long-awaited Messiah–the divine source of light that pierces the darkness and guides the Way to liberation from sin and reconciliation with God.