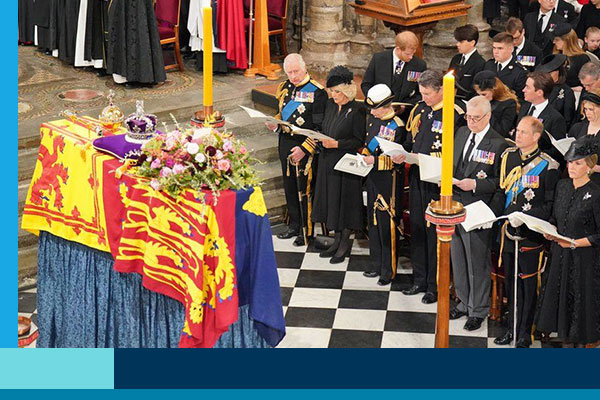 My alarm was set for 2:45am on Monday and yes I got up and watched the funeral, procession and committal service of the late Queen Elizabeth II till its final conclusion at 9am. It was quite inspiring and moving how the commemorative ceremonies marking the end of her life and reign were infused with the Gospel. I truly felt I had been to church and was surprised to tear up as they removed the crown from her casket and placed it on the altar.

I am not a “royalist” but having watched a few documentaries on the life of this monarch and a confessed fan of “The Crown” series, my curiosity and admiration for the person behind the position has grown. This was a woman who inherited privilege and responsibility and embraced the role with a deep sense of duty to God.  She was born not as the heir but her father was the ‘spare’ assuming the throne when his brother abdicated, choosing to marry the woman he loved over the restrictions of the title. In the history of British monarchs Elizabeth II experienced and navigated more cultural and political change than any predecessor.  She had to confront the dark scars and damages of colonialism which undermine the notion of a “Commonwealth”.  Still thousands lined up for hours, standing in a queue that stretched several kilometers to pay their respects, stating “she served us her whole life, what is a few hours of ours.”
Jesus served us with his life. What do we give Him in return? How do we show our respect and appreciation for His loyalty to us, His commitment and duty, not to conquer but to liberate and save us from oppressive forces? We are all born children of the King of the Universe with an inheritance of peace and hope today and eternal joy in our future.  We have the choice, as Elizabeth’s uncle did, to abdicate or accept our role as representatives of God’s kingdom.  Paul encourages believers in 2 Timothy 4: 8 with these words: “In the future there is reserved for me the victor’s crown of righteousness [for being right with God and doing right], which the Lord, the righteous Judge, will award to me on that great day—and not to me only, but also to all those who have loved and longed for and welcomed His appearing.”  I hope you’ll join me and maybe Elizabeth, on those golden streets as we cast those crowns before Jesus in grateful adoration.