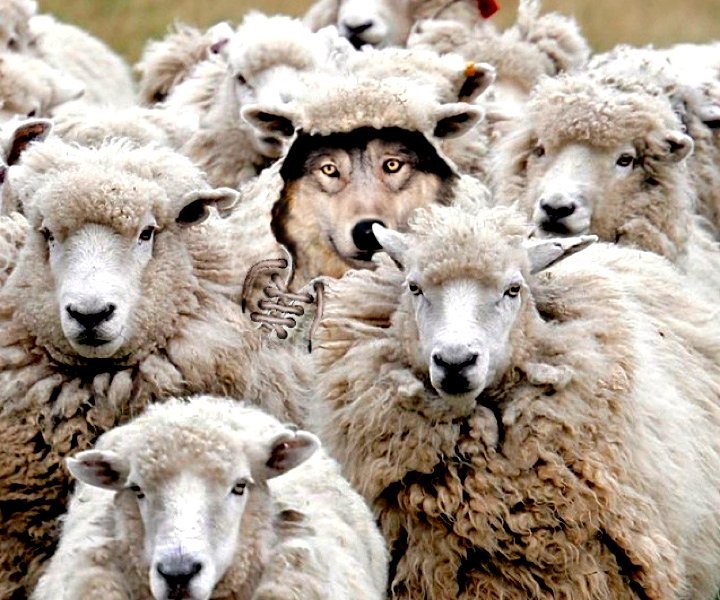 The Wolf and the Sheep

There once was a Wolf who could not silence the rumbling demands of his stomach. Even though he prowled the forest bordering fields of sheep, the diligent watch of the Shepherd guarded against every approach. Then one night during shearing season he came across a fluffy white sheep skin that had tumbled from the load bound to market.

The next day, in broad daylight under the camouflage of that wool coat, Wolf casually entered the pasture of Sheep. Before long a curious young lamb began to follow him and was quietly led away to its fatal end.

This classic Aesop’s fable contained a warning to all of us to beware of the wolf in sheep’s clothing. You can’t judge a book by its cover and an innocent appearance can disguise a dangerous agenda. If you’ve experienced betrayal, from a colleague, classmate, friend or loved one, you’ve probably met a wolf in sheep’s clothing. It can make you suspicious and hesitant to trust again.

The fear of being fooled again has you fixated on finding hints of deception. True enough, there is a real Enemy we face every day, who prowls around seeking someone to devour (1 Pet. 5:8). Satan will stop at nothing to feed his hunger for power. He and his evil forces will even use God’s own words, twisting them to manipulate the truth, to deceive and lead astray. But don’t forget the conclusion of Aesop’s story.

Feeling his confidence grow with his expanding belly, Wolf returns to the flock. But it just so happened the Shepherd had guests that evening and intended to prepare a feast of mutton stew for them. As the dogs herded the flock into the pen, his eyes were drawn to the sheep with an awkward gait. The creature he took hold of to butcher was the Wolf. The angels of darkness know who God is and the Bible says they “shudder” in fear at His name. (James 2:19) They know that God alone will be victorious and though their cunning traps lure some from Him, in the end, they will not win. That is our message of hope for today. Keep your focus on staying close to the Good Shepherd and you can let go of the worry about the Wolf.