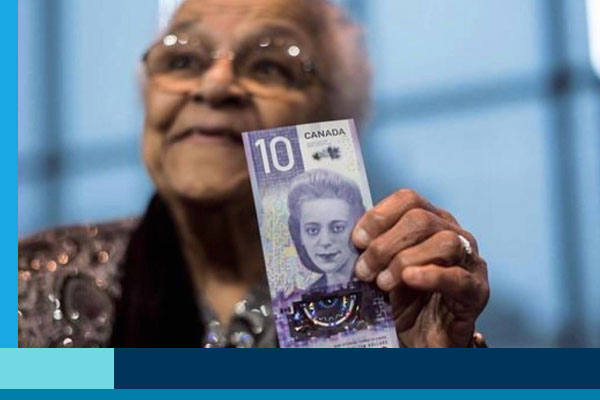 The Picture on the Canadian $10 Bill

In November 1946, hair salon owner Viola Desmond went to see a film at the Roseland Theatre in New Glasgow, Nova Scotia. But what began as a night at the movies became a night in prison.

Unaware that the theatre was segregated, the Black Nova Scotian chose a main‐floor seat. When she refused to move to the balcony where Black patrons were expected to sit, she was arrested and dragged out of the theatre.

Viola Desmond was born in 1914 in Halifax, Nova Scotia. As a young woman, she dreamed of opening a beauty salon, but discovered that Nova Scotia beauty schools did not accept Black students. Instead of giving up her dream, Desmond trained as a hairdresser and beautician in Montréal and in the United States. She went on to become a successful entrepreneur in Nova Scotia, operating a beauty school as well as her own salon.

For many people, the story would have ended there – but Desmond refused to accept the charges against her, and her case went all the way to Nova Scotia’s Supreme Court.

Ahead of her time in recognizing an underserved market, Desmond created a line of cosmetics for people with darker complexions. Despite her many accomplishments, Desmond still had to contend with the racist practice of segregation.

Segregation is the enforced separation of racial groups. In Canada, there were no official laws enforcing separation of Black and white Canadians. However, communities and businesses such as shops, theatres and restaurants made their own unofficial rules.

When Desmond was removed from the Roseland Theatre for sitting in a whites‐only section, existing laws were used to sanction her for breaking the unwritten rules of segregation. Desmond was charged with tax evasion for failing to pay the full tax on a main-floor movie ticket – a difference that amounted to only one cent.

By refusing to change seats and by fighting her conviction in court, Viola Desmond directly challenged segregation in Canada. She was not the first Black woman in Canada to push back against racism.

Carrie M. Best, the founder and editor of The Clarion, the first Black‐owned newspaper in Nova Scotia, had already written about the injustice of segregation. In 1941, she and her son were removed from the same theatre as Desmond, also for sitting in the whites‐only section. As Desmond learned five years later, Best’s challenge did not end the Roseland Theatre’s policy of segregation.

Desmond recognized that what had happened to her was an injustice, and she realized she had the power to speak out against it. After speaking to family and friends and realizing she had their support, Desmond decided to appeal her conviction, and it was eventually brought before the Supreme Court of Nova Scotia.

Even though she ultimately lost her appeal, her stand against injustice galvanized Nova Scotia’s Black community and helped inspire Canada’s civil rights movement. Unfortunately, the personal cost for Desmond was high. Her marriage ended and she abandoned her business in Nova Scotia, moving to Montréal. She passed away in 1965 in New York City.

The justness of Desmond’s cause was officially recognized in 2010, when the Lieutenant Governor of Nova Scotia posthumously pardoned her, removing her conviction from the historical record.

Desmond’s story, long unknown to most Canadians, is now becoming more familiar. In 2018, she became the first Canadian woman featured on a regularly circulating Canadian $10 bill. Desmond has also appeared on a Canadian postage stamp. She’s had her own Heritage Minute and there is even a ferryboat in Halifax, Nova Scotia named in her honour.

Now that her image is on the $10 bill, we carry Viola Desmond’s story in our pockets, helping to ensure Canadians know how she resisted segregation.

Throughout our history, many Black Canadians have stood up against segregation and discrimination. They have played a significant role in shaping our country, and through their actions, they have inspired many others to take action against injustice. And that is why the stories of Viola Desmond, Carrie M. Best, Lulu Anderson and Charles Daniels, to name a few, need to be preserved, taught and acted upon as we continue to work toward equality and fairness for all people.