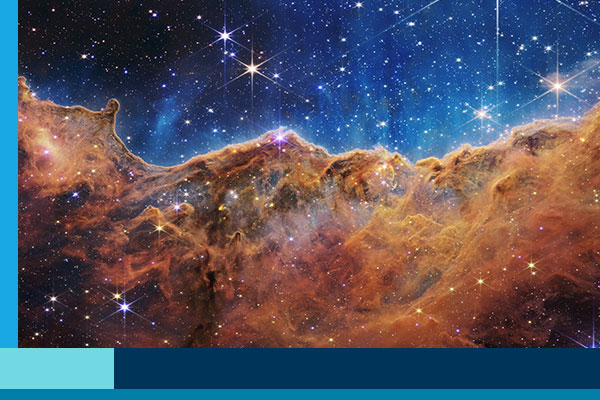 Look At The Stars

“Do you realize where you are? You’re in a cosmos star-flung with constellations by God, A world God wakes up each morning and puts to bed each night. God dips water from the ocean and gives the land a drink. God, God-revealed, does all this.” This is how the Message paraphrases Amos 5:8. Last week, on July 11, NASA released new views of the universe provided by the James Webb Space Telescope. This is the deepest look we’ve had into outer space and it is grander and fuller than expected. I stared at the image for several minutes transfixed. You know how you can gaze into a campfire or the ocean and find yourself lost in its mysterious powers? Even with this still photo I was likewise captivated by its spectacular detail. I wish I could print a jumbo scale version for my bedroom ceiling to be the scene I fall asleep and wake up to. Now here’s what makes this even more impressive. When we look at the night sky from earth, we see mostly dark empty space speckled with twinkling stars. But if you were to hold a poppy seed at arms length toward a pitch black spot in the panorama, this picture reveals what’s behind that single pixel.  In the vastness and splendor of the known realm, what significance do we have? David asked the same question a few millennia ago, even before the invention of telescopes. “When I consider Your heavens, the moon and the stars, which you have set in place, what are mortal humans that You are mindful of them?” (Psalm 8). In other words, given the beauty and enormity of the universe, how can human beings compete for God’s care and attention? Yet amid the billions and trillions of starry hosts, on this speck of dust called Earth, God sees us. Our significance was revealed when Jesus left the limitless expanse of heaven and accepted the confines of a human body. His incarnation, death and resurrection demonstrate just how important, valued and loved we are by the Maker of the Heavens and Ruler of the Stars. We are the apple of His eye and the splendor of space can’t compete with us as His cherished treasure.