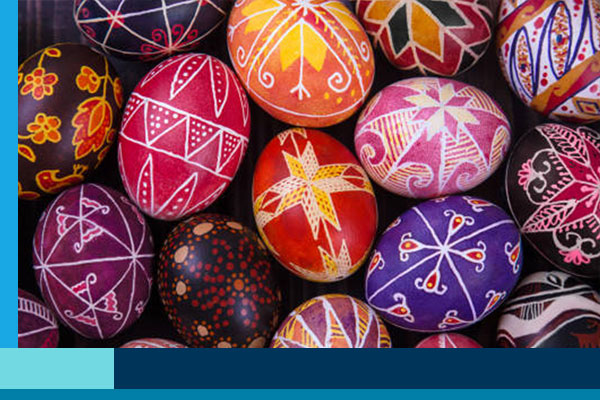 Since medieval times, the people of Ukraine have employed a special technique decorating eggs called ‘pysanky’ which means ‘writing’. Designs were drawn on the pale shell with beeswax before being dipped in a yellow dye made from tree bark or grain husks. Lines and shapes to remain yellow were then drawn with another layer of wax before dipping into darker colour like orange, green or red. The final dip was in an inky bath from stewed black maple leaves or dark periwinkle. The egg is then heated over a candle flame and the layers of wax wiped off to reveal the multicoloured art.  As ancient ritual objects they were created and given like we exchange cards today to express congratulations or condolences. Every image, line and colour held a special meaning. Following the spread of Christianity in 988 A.D., Ukrainians began incorporating symbols of faith into their designs. The works of art were blessed in the Easter service and then given as gifts.  When Stalin controlled the Soviet Union, a distrust of the art grew because of its Christian connection, forcing the practice into secrecy.  As technology offered more precise tools and additional colours, these eggs became known for their intricate and impressive designs and the intention to carry a message of love was lost.  Desiring to reclaim this traditional aspect, one artist told me she only makes her eggs during Lent and tries to maintain an altruistic and loving mindset during the hours it takes to complete a single work.

When Jesus walked this earth He was saddened to see how religious rites had become practices to impress or oppress, straying from their original purpose to communicate hope and deepen the relationship with the Creator.  Jesus reclaimed the Jewish Passover feast during the Last Supper, using it to illustrate His redemptive mission of sacrificial love.

In that same spirit, OAC is using old traditions to bring a message of joy to our neighborhood. For four days the trees at our courtyard entrance will become Ostereierbaum, Easter trees, dripping with coloured eggs that point to Jesus as the promise and proof of new life.  Tell your friends, drive by, snap photos, look up the linked Bible text and give thanks for the living hope in Jesus (1 Peter 1:3).